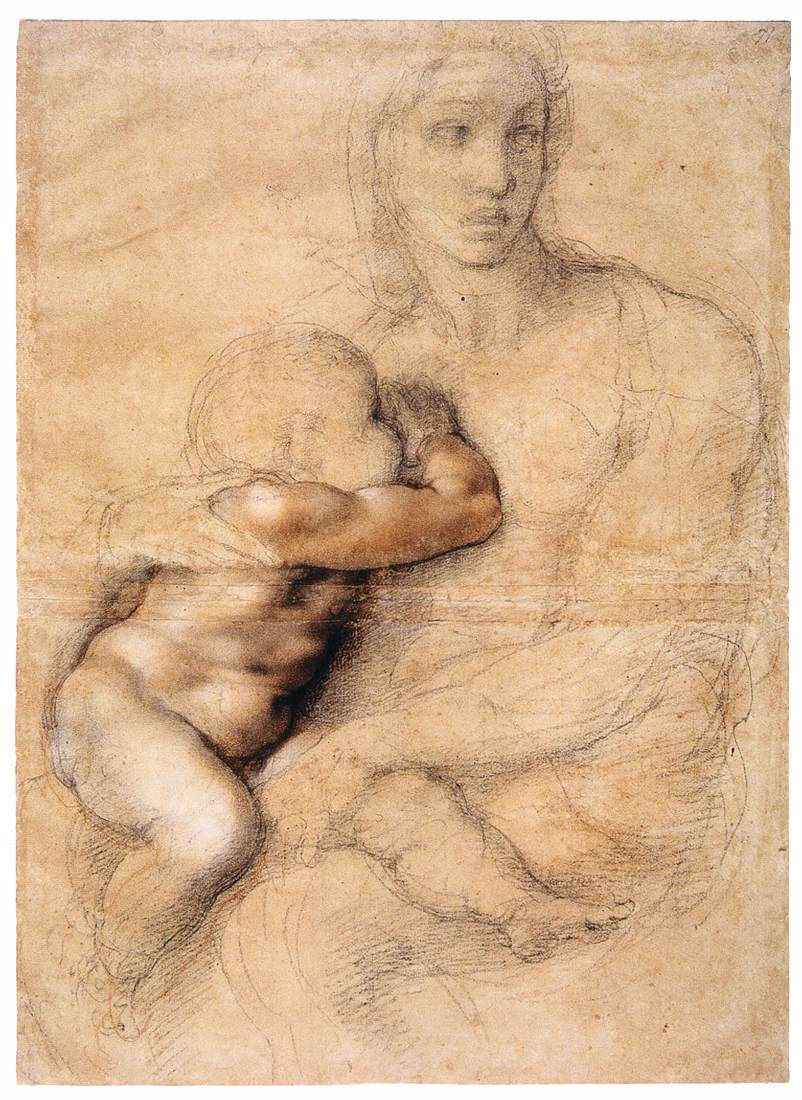 Today as the gallery is closed tomorrow, I biked to the AGO – Art Gallery of Ontario to see the Michelangelo Drawings show.  I had been really looking forward to this show as the video by Hugo Chapman of the British Museum was informative and engaging.  Perhaps, it was the setting – I really don’t see the point of having had Auguste Rodin works combined with the show.  Seriously, less is always more.

Frankly, I think that the works should have been contained in one salon with lots of seating and darker, more soulful colours for décor.  White walls are so dense-energied and negative…  The only salon that worked was the final one where there were dark soulful walls; however, that look was marred by the garish lighting and imposing Rodins which truthfully I paid little heed to.  Frankly, I was underwhelmed by the show; one needed to be able to sit and truly savor the works of art.  Going from salon to salon with the frenetic colour schemata was disruptive and precluded one being able to have a great time.  For an artisan mood is everything.

Too, as these were sketches, there were times that they were unimpressive.  I am certain that there are truly masterful Michelangelo drawings in private collections; those on exhibit at the AGO aren’t among them.  The only one that moved me is the final piece in the exhibit which for me saved the experience, Michelangelo’s Madonna and child.  After having been decidedly underwhelmed, I came downstairs and went past the galleries of objets d’art to the private salon, took a seat and soulfully drank of Sir Peter Paul Rubens’ Massacre of the Innocents.  I always go there because the décor of the salon is just right.  The mood is set by the soulful tone of the walls and the just-so lighting.  Both work to enhance the power and richness of tones in the painting which is worth every penny of the 117.5$m that Kenneth Thomson, 2nd Baron of Fleet paid in 2002 at Sotheby’s auction.

Of course, I also take the time to give thanks when visiting the salon – it is akin to going to church for me… a think that I last did at my father’s funeral in August 2008.  Today, I sat there for about 45 minutes enjoying the Rubens masterpiece and was ever mindful that this creative genius is in entity two of my cadre – one of greater cadre 7, pod 414.

Merlin and I as task companions are in entity six of said cadre whilst in entity one of same cadre is Jim Henson who has since reincarnated and is female, London-born and plans a life on the London stage.  Too, that entity, 1, is host to Sir Anthony van Dyck who is currently incarnate my oldest friend and resident in British Columbia though Dutch-born.

Don’t know his casting as such things were not shared in the Chelsea Quinn Yabro book, Messages from Michael, but Michelangelo Buonarotti’s Overleaves are as follows:

A fourth level mature artisan in the passion mode with a goal of growth, an idealist in the emotional part of intellectual centre with a chief feature of arrogance.

Happy New Year and the best in 2015.  I am grateful for your continued support and patronage.  Spread the word far and wide – this right here is the most inspiring, uplifting ode to shamanic realism of a joint on WordPress.  Sweet dreams you, you are more magical and beautiful than you know.  I love you more.

Interestingly enough, when I first began this blog, back in February 2013, I knew that there were dreams like those of Won’t Take the A Train and Cicada Principle that I wanted to share… that I have actually remained focussed this long and have had as many interesting dreams to share herein with you has served to make me realise how awesome this man Merlin was.

Merlin it was who said one night as he cuddled in bed at 20 Amelia Street in tony Cabbagetown,

“My darling, you are quite talented and this is quite the gift you’ve got… don’t ever forget that.”

At the time, we were speaking on the cusp of his final hospitalisation of his intention of doing whatever possible to send me dreams from beyond after his passing as he wanted me to write of him and me.  This coming year, I plan on spending less time on this blog as I put the finishing touches to said work; the story of shamanic Merlin and me interspersed with dreams aplenty many of which have not been shared in this blog.

Too, I plan on being very detailed on this blog in my recounting of my experiences with a former employer because falling prey to the racial predator is not something that one should be ashamed of or live in denial of.  This has been the one empowering takeaway from the Jian Ghomeshi scandal – I always thought him an absolute fraud.