In the mad dash to board the train from King’s Cross/St. Pancras Station to Paddington Station, I boarded the wrong train and ended up losing almost of hour of valuable time.  Nonetheless to Windsor with me, indeed.

The ride to Windsor was lovely and it was still well before before 1000 when I got into town.  So nice to know that a flash of the London Pass gets one into the Castle, plus to see the exhibition of TRH Duke & Duchess of Sussex’s wedding finery plus the outfits worn by pageboy, HRH Prince George of Cambridge and the always ‘on’ HRH Princess Charlotte of Cambridge.

Next, through the hurdle of being scoured by the most thorough security detail; and with good reason too.

The mélange of Chinese, Japanese and Korean dialects made for an interesting symphony of sounds as I made my way past security and onto castle grounds.

I am reminded of Vancouver Island by the hearty vegetation down below.

Nothing is more refreshing than the smell of moss in cooler weather.  The air is so fresh here in Berkshire.

The view from the Middle Ward down to St. George’s Chapel; but that’ll come after touring the castle’s state apartments.

The glorious view north across the River Thames to Eton College Chapel… Nothing beats being out on the terrace and looking out to the landscape below.

The view along the terrace towards the entrance to the castle.

Once inside, of course, photography is not allowed.  This, understandably, is for security reasons; it is after all the Sovereign’s main residence.  Formidable, an entrance indeed.  Touring the state apartments, the progression’s starting point was different to previous visits.

Without doubt, I knew that the wedding outfits worn by TRH Duke & Duchess of Sussex would not be on display in the castle’s Green Drawing Room; there is only one door into said room for the public and the other at the opposite end, leads directly into the Sovereign’s private apartments.

Furthermore, that single door is too narrow to accommodate persons going and coming into the Green Drawing Room, if they were to enter and exit by said door.

Similarly, I knew that the exhibition, A Royal Wedding: The Duke and Duchess of Sussex could not have been held in St. George’s Hall above.  There is simply too much natural light which floods the space; this could actually prove more harm than good – even though it would be best to see the dress in natural light.  Moreover, I did not expect that it would be held there as the space is too large and, frankly, with the amount of racially charged animus towards this marriage, it would likely not draw as large a crowd to warrant being staged there.  Truth be told, there were no Caucasians viewing the exhibit when I moved through it, than there were East Asian and blacks combined.

I will never forget my confusion on first experiencing The Waterloo Chamber in this lifetime.  I just felt as though, perhaps, my sense that I had been to Windsor Castle in prior lives or a lifetime was off.  Of course, I would learn that this marvellous salon was installed during HM King George IV’s reign, at which time, I had reincarnated into Barbados, after having been a countertenor at the court of HM King George III and during the early years of his son’s Regency.

Then again, those high-placed windows in the Waterloo Chamber would preclude its assignation as the setting for the exhibition, A Royal Wedding: The Duke and Duchess of Sussex.

Though noted for its stunning portraits of both HM Queen Elizabeth, The Queen Mother and HM King George VI, this room much like St. George’s Hall has too much light exposure. 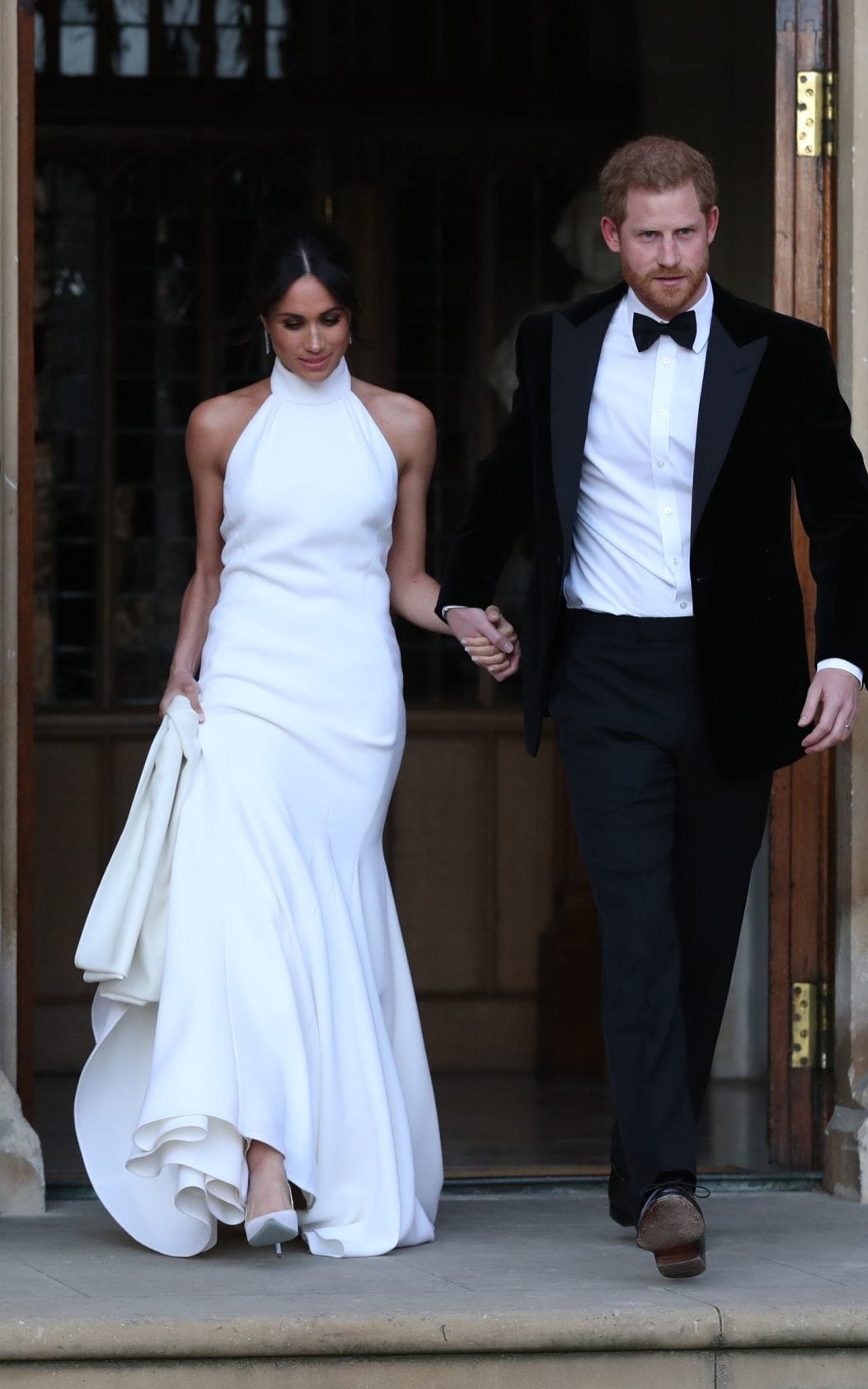 On entering the long narrow hallway with large windows that look out onto the terrace, the River Thames and the north shore beyond, one happens on a wall of linen panels which cover the floor to ceiling cabinets with priceless china from the Royal Collection.

Imagine all these iconic moments from the wedding of TRH Duke & Duchess of Sussex on hanging linen panels of more than 8 or more feet tall.  The effect is warm, enveloping and their size deftly impress on one, the uneclipsed love between these two star-crossed lovers.

Next, into the grandeur of the Grand Reception Room one slips and with the heavy red curtains drawn, the effect is even more stunning.  The large chandeliers are softly dimmed and handsomely display the bridal garments of the wedding party.

The embroidery on HRH Prince Henry, Duke of Sussex’s uniform, to the Queen Mary Diamond Bandeau tiara when seen in intimate detail proved more breathtaking than I had anticipated.  Goodness, even the shoes worn by Meghan, HRH Duchess of Sussex were exquisite.

What I found most interesting about the dress was its sheer simplicity.  The dress serves as a foil for the intricacy of the five metre veil entwined with the fifty-three flowers of the Commonwealth nations, along with the state flower for Meghan, HRH Duchess of Sussex’s home state of California.  Not until in the presence of the dress did its simplicity make sense; the dress is masterfully constructed such that its simplicity reminds one that only the expert craftsmanship of a couturier could have designed and manufactured the dress.

Yet, there was more to the simplicity of this Clare Waight Keller dress for Givenchy and it was not until moving around it a second time that it struck me; the simplicity of the dress speaks to the recent past of Ms. Markle’s African heritage.  Its simplicity speaks of the history of a people which was erased, wiped out by the terror of having been robbed and enslaved.

Yet like the simplicity which belies the masterful craftsmanship of the couturiers who created this stunning dress, there is also greatness to a people though reviled, socio-economically oppressed, criminalised, marginalised and made to feel inferior… the same people whose greatness shrines through in Jazz, for one.  Remarkably, the simplicity of the dress, is like the sheer eloquence with which HRH Prince Charles, Prince of Wales sincerely both acknowledged and apologised for the past, which his society and family had contributed to in the immense suffering of Africans; this he did this past autumn when touring West Africa on behalf of HM The Queen.

This was not only not a heavily attended exhibition but, at the time that I moved through it, there was not a single Caucasian viewing the wedding garments.  Though many would like to have you believe that there is no basis in race why they dislike Meghan, HRH Duchess of Sussex, that is just a damn lie.  Naturally, neither medicine nor academia acknowledges the existence of the racial predator as ‘No’ is the most powerful word when dealing with blacks.  Indeed, not until going to St. George’s Chapel after the tour of the castle was concluded, did one see Caucasians in numbers that reflect their proportions in the society.  Indeed, unlike previously, one was being fixed with looks that were charged with racial animus.

Though she is now the most reviled black woman on the planet, truth is that the soul who is now Meghan, HRH Duchess of Sussex was Margaret Beaufort, Tudor Matriarch: key figure in the War of the Roses, cousin of HM King Henry VI, mother of HM King Henry VII, mentor, counsel and favourite of her grandson, HM King Henry VIII who was much impressed by her focussed untrammelled ambition, great-grandmother of HM Queen Elizabeth I.

Without her drive and singleness of purpose, England may still be a Catholic nation and its language may well be French.  Nonetheless, such is the rabid, irrational tribalism that is racism; her true nature cannot be perceived by the blind who can never see either the links to the past or the bigger picture.

In the end, I was much inspired for having made this pilgrimage to see this dress, which in its simplicity symbolised hope, atonement and the love of two entity mates who have known each other in twenty prior lifetimes.  The simplicity of this dress proved an epiphany.

Statue of HM King Charles II without whose drive, there would have been no Restoration.

View of the round tower on exiting the State Apartments and at the edge of the Quadrangle.

Sadly, photography is not allowed inside the chapel.

Despite the general seething that being black elicited from most persons here – thanks to HRH Prince Henry, Duke of Sussex having married the black woman, I rather enjoyed revisiting the spiritual home of the Knights of the Garter.  There is a certain warmth and intimacy to the quire’s dark woods that I favour.

And like that, another day of adventure was completed.

As the train sped back to London, I spotted this queer, though, appealing architectural gem.

As ever, thanks so much for your ongoing support and always remember to become awake when asleep into the magical realm of dreams.